On the evening of October 4th, 2014, ignoring the cold weather, thousands of people ventured out into the streets of downtown Toronto for a free all-night adventure in contemporary art scene. There were 130 art installations unleashed throughout parts of the city.

This was the ninth annual Scotiabank Nuit Blanche, and this year’s works were interesting, yet very distant from each other, as one needed to walk miles to see the next piece. After scouring the city for more than six hours, I saw about a couple dozen of works in downtown Toronto.

I have listed the top five highlights of the night, based on originality and popularity.

“HOLOSCENES” by Lars Jan—a performance installation that featured a large aquarium occupied by a single performer who carries out a human act, such as playing guitar. It was indeed a human aquarium!

“Walk among worlds” by Máximo González—this installation aimed to address the political divisions of the world, using 7,000 beach balls printed to resemble globes.

“Split Chorale for Viljo Revell’ by Kathryn Andrews and Scott Benzel—this large-scale performance work  transformed the building’s multilayered interior into an inverted theatre. A video montage floated in the middle and was surrounded by choral singers (about 50 singers). 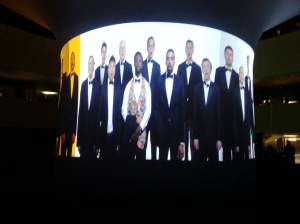 “Made in China” by Maria Ezcurra—this installation was composed of clothes labeled Made in China, and it was set in Chinatown. It represented the symbolic connection among East-West dichotomy. 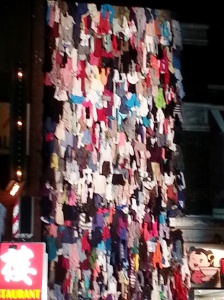 Would love to hear your experience at Nuit Blanche!