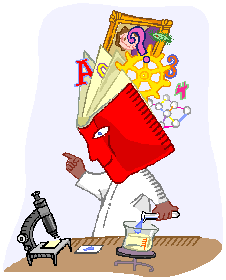 Are scientist artists? Or are artists scientists? Is this a chicken-and-egg question?

The understanding of artists and scientists conflicts when scientists turned into artists. Visual artists usually find the inspiration to create around their community or from their own experiences, and many times they find themselves looking for inspiration outside their “lab” or studios in order to create some new form of “art.” In the search for inspiration, most artists research, connect, visit new venues, read, or travel, all with the aim to find inspiration and to embark on new projects (That’s the essence of research, right?), whereas scientists, particularly medical scientists, spend most of time researching and experimenting in their labs with the hopes of finding a breakthrough that directly affects the community. But when a scientist turns into artist, she or he produces art that directly incorporates scientific practice and art medium. Then the meaning of a scientist as an artist creates debates.

Artists’ careers are like those of scientists, for the most part. The impetus of an artist is to create a new body of work, whereas for the scientist, it is to come up with a new work, a new innovated discovery, the latest of their field. Well, that’s the aim of the artists as well, to come up with a “new” project or movement in the art world to shake the art market. However, there is a great difference between the career path of the artists and that of the scientist.  While they both struggle to achieve their goals, the beginning career path of a scientist versus an artist is very distinct. To be a scientist requires stepping into academic rigor, while to be an artist requires the subjective claim that one is an artist. As a matter of fact, anyone can claim to be an artist but not everyone can claim to be a scientist. Anna Schier argues that the scientist and the artist could not be more opposite “They represent rationality vs. impulse, logic vs. fantasy, method vs. creation.”

Interesting enough here are a few famous scientists who naturally turned to the arts, but were not recognized as artists or just artists:

Adam Reed Tucker – Joined his two passions of art and architecture, and hit upon the idea of using Lego bricks. Then, he founded Brickstructures, Inc., and began to design and build models of famous landmarks.

Albert Einstein – A physicist who was also an accomplished violinist. He claimed to see his life in terms of music.

Edwin H. Land – An optical scientist, expert in the physical and chemical properties of colour, held 535 patents, and became known for his invention of Polaroid lenses and instant photography.

In general, as soon as one acquires the title of “scientist,” one makes a decent income, and the scientist doesn’t need (necessarily) to get a second job as the artist does to survive in her or his career path. Artists constantly struggle to make a living from their craft.  Artist’s careers are in fact a long life struggling path. Rather than being concerned with any new breakthrough or discovery, artists are more preoccupied with the survival and their ability to continue their projects that are limited by lack of funding and/or opportunities. Thus, inherently artists are not scientists nor are scientists artists, but they can become one or both. However, artists indeed have a common trait with scientists. That is, creativity—the one thing they share. Perhaps, the greatest scientists of all, are the greatest artists of the world, but this side of the story is hardly ever told.