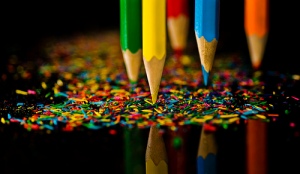 Colour is a visual perception of the human eye that interacts with the spectrum of light. Our understanding of light and color began with Isaac Newton (1642-1726), the English scientist, who discovered that when pure white light passes through a prism, it separates into all of the visible colors. He was the first to refract white light with a prism, resolving it into its component colors:  red, orange, yellow, green, blue and violet. Thus he was the first to understand the rainbow. Further experiments demonstrated that light could be combined to form other colors. For example, red light mixed with yellow light creates an orange color.

The science of color is sometimes called chromatics, chromatography, colorimetry, or simply color science. Color can influence our emotions, our actions and how we respond to various people, things and ideas. Much has been studied and written about color and its impact on our daily lives. While perceptions of color are somewhat subjective, there are some color effects that have universal meanings.  Such as:

RED is the color of fire and blood, so it is associated with energy, war, danger, strength, power, action, confidence, courage, vitality, and determination as well as passion, desire, and love.  It is a very emotionally intense color. It creates feelings of excitement or intensity. Read enhances human metabolism, increases respiration rate, and raises blood pressure. It has very high visibility, which is why stop signs, stoplights, and fire equipment are usually painted red. In heraldry, red is used to indicate courage.

The colour read is also linked to romance. Studies show that men are more attracted to women wearing red. In other studies, men were shown photographs of women framed by a border of either red or white. The men tended to find the women more attractive when they appeared in the red frame (read more).

To the human eye, orange is a very hot color, so it gives the sensation of heat. Nevertheless, orange is not as aggressive as red. Orange has very high visibility, so you can use it to catch attention and highlight the most important elements of your design.

GREEN is related to nature. It symbolizes harmony, tranquility, freshness, health and fertility. Green is often used in decorating for its calming effect as it is thought to relieve stress. Green suggests stability and endurance. In heraldry, green indicates growth and hope. Green is my colour!

BLUE is the color of the sky and sea. It is one of the most popular colours. It is often associated with depth and stability. It symbolizes trust, loyalty, wisdom, confidence, intelligence, faith, truth, and heaven. It is considered beneficial to the mind and body. It slows human metabolism and produces a calming effect. Blue is strongly associated with tranquility and calmness. In heraldry, blue is used to symbolize piety and sincerity. They say people are more productive in blue rooms.

Dark purple evokes gloom and sad feelings. It can cause frustration.

BROWN brings to mind feelings of earth, warmth, order, convention, comfort, and security. It is often described as natural, down-to-earth, and conventional, but brown can also be sophisticated. It also suggests stability and denotes masculine qualities.

WHITE is associated with light, goodness, innocence, purity, and virginity. It is considered to be the color of perfection.  It symbolizes safety, purity, and cleanliness. White can represent a successful beginning. In heraldry, white depicts faith and purity. In advertising, white is associated with coolness and cleanliness because it’s the color of snow.

BLACK is the absence of colour, but it symbolizes a mystery associated with fear and the unknown. It is associated with power, elegance, formality, death, evil, and mystery. It usually has a negative connotation (e.g. black humour). Black denotes strength and authority; it is considered to be a very formal, elegant, and prestigious color (black tie, black Mercedes). In heraldry, black is the symbol of grief.